Rowes Wharf is a modern development on the Waterfront in Boston. It is best known for the Boston Harbor Hotel’s multi-story arch over the wide public plaza between Atlantic Avenue and the Boston Harbor waterfront. Along the waterfront, you will find a marina, restaurants, a water transportation terminal, and a floating stage offering free concerts and movies during the summer. MBTA boat services link the wharf to Hingham, while water taxis operate to and from Logan International Airport. Cruise boats also operate from the wharf.

Harbor Towers in the Waterfront is located next to Rowes Wharf. These luxury, 40 story condominium towers are in a prime Waterfront location on Boston Harbor and the Rose Kennedy Greenway. These homes have sweeping Harbor and City views and are conveniently located just steps from the Financial District.

Burroughs Wharf is home to Boston’s Fire Marine unit. There are two vessels docked on the northern side of Burroughs Wharf. The larger of the two vessels is the 76-foot fire pump boat built in 1972. The other vessel, built in 1992, is a 30-ft high-speed pump boat. . Amenities at Burroughs Wharf include a water fountain surrounded by landscaped gardens, a promenade, benches, public landing area, marina slips, and a water taxi stop. This condominium complex has one of the most pedestrian-friendly walkways on the Boston waterfront. The HarborWalk wraps around the two luxury condominium buildings and has incredible views of the USS Constitution and Bunker Hill Monument in Charlestown. 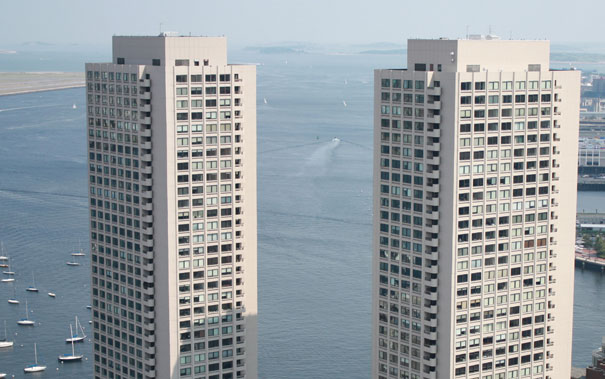 Harbor Towers sits on Boston Harbor and is located just steps from historic North End and Faneuil Hall. This property has unparalleled and unobstructed views of the Financial District, Logan Airport, Fort Point Channel and Charlestown. There is 24 hour concierge/security and one of Boston’s most beautiful outdoor pools. The lobby and elevators have recently undergone extensive renovations and the grounds are kept beautifully. Harbor Towers are one of the most reasonably priced , luxury waterfront condo developments in the city.

What to do on The Waterfront

To see a whole lot of waterfront—and waterfront attractions—meander along Boston’s Harborwalk, which right now includes almost 40 miles of pedestrian- and bike-friendly public access at the water’s edge. For an extended exploration, Urban AdvenTours offers daily bicycle rentals for adults and kids as young as 5. They also lead “Bikes at Night,” a sunset tour of the waterfront, and the “City View Tour", a classic tour of Boston.

Get away to the islands—the Boston Harbor Islands, that is. A quick ferry ride from Long Wharf takes you to Georges or Spectacle island. Georges is home to a Civil War-era fort and often hosts concerts and other events. From there, you can hop a smaller boat to Grape, Bumpkin, Lovell, or Peddocks. On Spectacle are hiking trails and a lifeguard-supervised beach.

Long Wharf is also the launching point for Boston Harbor Cruises, a family-owned business since 1926 offering whale watches, history tours, and all sorts of other themed rides.

Some of the other popular luxury buildings on the Waterfront are:

Some local hotspots on The Waterfront include: