The South Boston Waterfront is the formal name of an area in the South Boston neighborhood of Boston, Massachusetts, but it has increasingly becoming known as the Seaport District. It is part of the Port of Boston on Boston Harbor. While the area is not clearly defined, the Fort Point Channel forms one border and some parts of the area are also included in Fort Point neighborhood, an older, more historic term.

According to the Boston Waterfront Guide the South Boston Waterfront now has 55 restaurants, 4 hotels, 9 major attractions and continues to grow. The Boston Convention and Exhibition Center straddles D Street. The Seaport Hotel and Seaport World Trade Center is located on Commonwealth Pier. A new home for the Institute of Contemporary Art hangs over Boston Harbor just north of Northern Avenue. The John Joseph Moakley United States Courthouse is on Fan Pier.

The Silver Line of the MBTA provides public transportation to the area and the Boston Harborwalk runs through it. 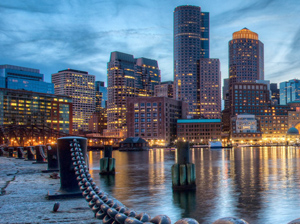 One of the premier development in the Seaport District is Fan Pier’s luxury condominiums of Twenty Two Liberty. Fan Pier’s extraordinary location in the very heart of Boston Harbor provides the setting for an equally extraordinary residential experience. The luxury condominiums of Twenty Two Liberty are among the most exclusive properties on the East Coast, boasting elegant homes, unparalleled 270º city and harbor views.

What to do in the Seaport District

Some of the other popular luxury buildings in the Seaport are:

The Seaport District has recently become a popular dining destination, especially in the summer months. Some of the local hotspots are:

There is plenty to do in the Seaport from fitness to prepping for a night out on the town!

Here's what is Coming Soon!